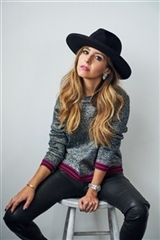 Lilliana Vazquez ’98 is one of the most sought-after personalities in the industry, acting as host, influencer, style advisor and producer to the biggest names in entertainment, both on-air and online. She has quickly become one of the most watched, multifaceted talents thanks to her signature brand of approachability and her unique ability to capture an audience’s attention.

On NBC’s TODAY, Lilliana shares her experiences and expertise with millions of viewers, covering the latest in technology, business, travel, entertainment and lifestyle. As a correspondent for Access Hollywood, Lilliana leads coverage on the biggest names in entertainment, and she is the show’s secret weapon on Hollywood’s most important red carpets like The Golden Globes, Emmys and The Met Gala.

In addition to her day job(s), Lilliana is the expert producers and executives call, and call back, to lend style expertise to segments on entertainment programs, including E! News, Wendy Williams, The Talk and The Rachael Ray Show. Lilliana has also served as an ambassador, spokesperson and content creator for some of the most recognized brands in the world.

A graduate of George Washington University, Lilliana was born and raised in Fort Worth to a Puerto Rican father and Mexican mother. She is a proud Texan and Latina. On the charity front, Lilliana is heavily involved with the Hispanic Federation, the nation’s premier Latino nonprofit membership organization that seeks to support Hispanic families and strengthen Latino institutions.

Lilliana resides in the Chelsea neighborhood of Manhattan with her husband. The pair recently purchased a home in Montauk and love to spend weekends at the beach. In her spare time, Lilliana enjoys traveling, snowboarding, baking, tequila tasting and shopping online – not necessarily in that order!

When asked what FWCD means to her, she said, “Opportunity. The opportunity to make lifelong friends, to develop confidence, to explore a bigger world beyond Fort Worth and, most of all, to be a part of this very special community. I was a recipient of financial aid during my 10 years at FWCD, and I’m confident that I would not be where I am today without the incredible generosity of the program and its benefactors.”
Return to previous page
4200 Country Day Lane, Fort Worth, TX 76109
Phone: 817.732.7718
Fort Worth Country Day (FWCD) is a JK-12 private, independent, coeducational, nondenominational college-preparatory school located on approximately 100 acres in Fort Worth, Texas. The mission of Fort Worth Country Day School is to foster the intellectual, physical, emotional, and ethical development of capable students through an academically rigorous college preparatory program that integrates the arts and athletics.